Vietnam is gradually becoming an ideal destination in the eyes of tourists, the diversity of geographic structure has divided Vietnam into three regions: the North, the Central and the South, along with the unique characteristics of the people and the nature in each region.In particular, Hanoi capital is located in the Northern region, this is the administrative and political center of the country covered in an ancient mysterious beauty. With a thousand-year history of civilization, visitors will get to experience the historic sites, ancient streets and peaceful atmosphere here.

Hanoi is the capital city so there are many domestic and international flights so you can easily find cheap flights, direct flights from abroad to Hanoi around $ 700 – $ 1200, or flights from Ho Chi Minh City to Hanoi about 60 $ – 100 $. The best time to come here is in the autumn around July to October with cool weather and many cheapest flights to Ha Noi Viet Nam. Easy to  buy flight tickets with bitcoin on travelaki.com

Ha Noi Viet Nam is a big modern city so it’s very easy to get around with many means of transportation. The airport is located 40 minutes away from the center, so here are several options for you

Mini buses from the 3 domestic airlines:Vietjet Air, Vietnam Airlines,Jetstar. It takes about 40-45 mins to get to the center and the ticket price is around 45.000 vnd/ person ( ~$ 2)

Cheap price casual Bus : If you are not in a rush, you can use Buses to get around. the ticket price is around 50 cents

Places to visit in Ha Noi

There are many famous tourist attractions in Hanoi, most of the ancient architectures here are kept unchanged so that the city maintains its unique, mysterious vibe but still be very modern and developed.It makes tourism in Hanoi blooming.

Hoan Kiem lake, meaning ” Lake of the Returned Sword” , also known as Guom lake ( Sword Lake ), is the most famous destination in Hanoi. According to the legend, this was where the Emperor Le Loi returned the magical sword to the Golden Turtle God after having defeated the Ming. The scenery around Hoan Kiem Lake is picturesque and breathtaking in the Autumn. 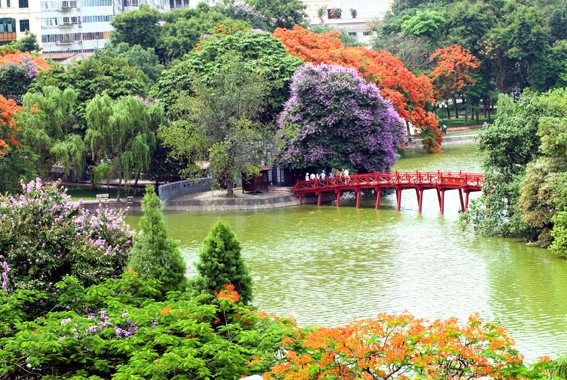 Temple of  Literature in Ha Noi is the very first University in Vietnam built in 1070. Initially, this university had only accepted students from the royal families before it opened to welcome intelligent commoners; nowadays,we still can see the names of thousand gifted scientists,doctors engraved in the turtle stones around the temple. Tourists will get to discover magnificent buildings, ancient history of many dynasties .Price ticket 30.000 vnđ ( ~ $ 1.3)

The Imperial Citadel of Thang Long Ha Noi has been a centre of political power in the region for 13 centuries without interruption and became a World Heritage Site in 2010. The place has alot of sophisticate dragon and phoenix statues and engravings on the walls surrounding the ancient architectures . In the present, They still carry out some archaeological digs to find out more important pieces of history here. Ticket price : 30.000 vnđ (~  $ 1.3 ) Ho Chi Minh Mausoleum is located in Ba Dinh Square, it was built to keep president Ho Chi Minh’s body remained  so that it has attracted millions of tourists so far. There are alot of military honor guards protecting the place inside out, make sure you dress respectfully , not too short ,not too revealing and no photography,no video recording. The Ba Dinh Square is a large and nice area to walk around at night , some locals usually come here to exercise. 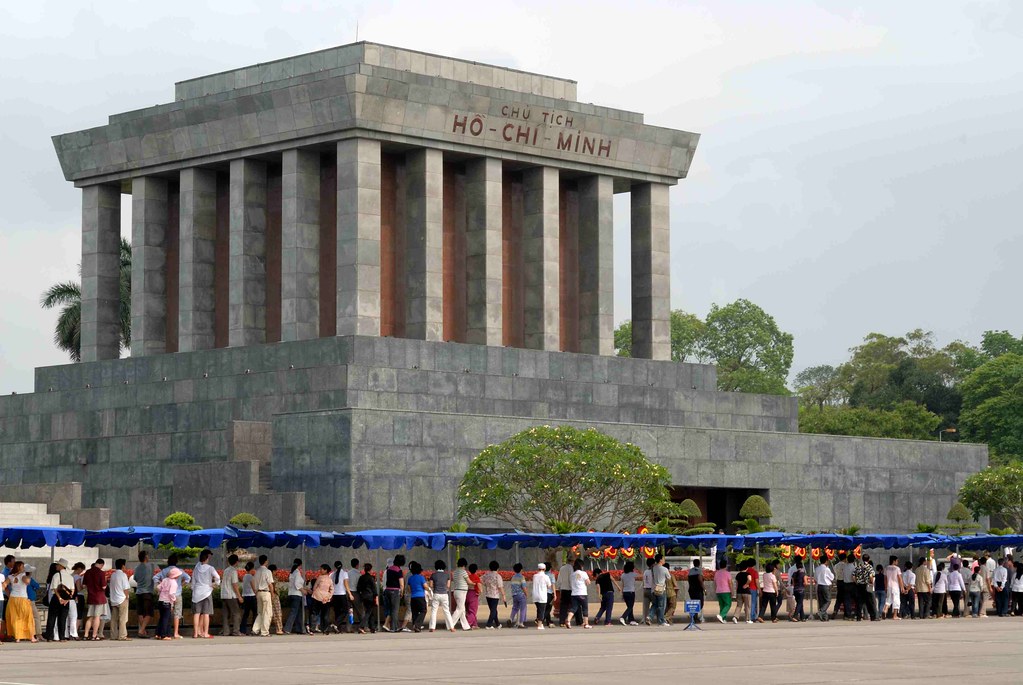 Ha Noi Old Quarter is a location you can’t miss , it has been the residential and commercial area dated back to the emperor dynasties with 36 crafts guilds ( or 36 streets) selling various goods. Later in the French colonial times, it changed many Vietnamese Chinese styled architectures into the 50s Western style. So you can imagine how special is the place being mixed with Eastern and Western elements .Indeed, in the night time, you can visit the Beer Street Tạ Hiện located inside the Old Quarter , also known as ” the international intersection”, many locals and tourists come here to enjoy the bustling ,diverse culture city night life. 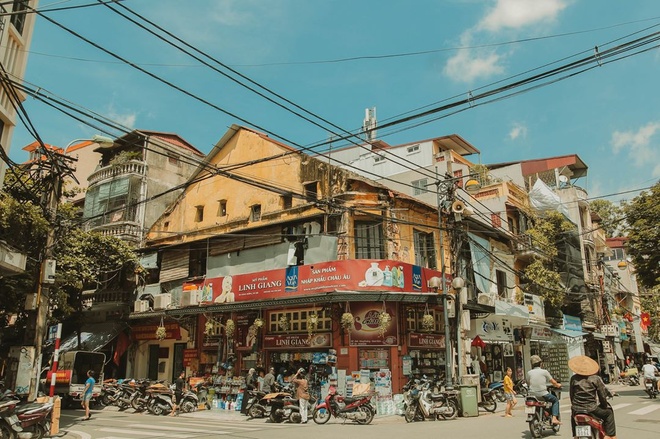 Opposite with the Old Quarter, The French Quarter is not as lively and bustling but it’s elegant, peaceful and stunning with all of the French style architectures. It’s famous for buildings that hold historic values such as : Hoa Lo Prison ( Maison Centrale) , Ha Noi Opera House,St. Joseph’s Cathedral Hanoi..ect. 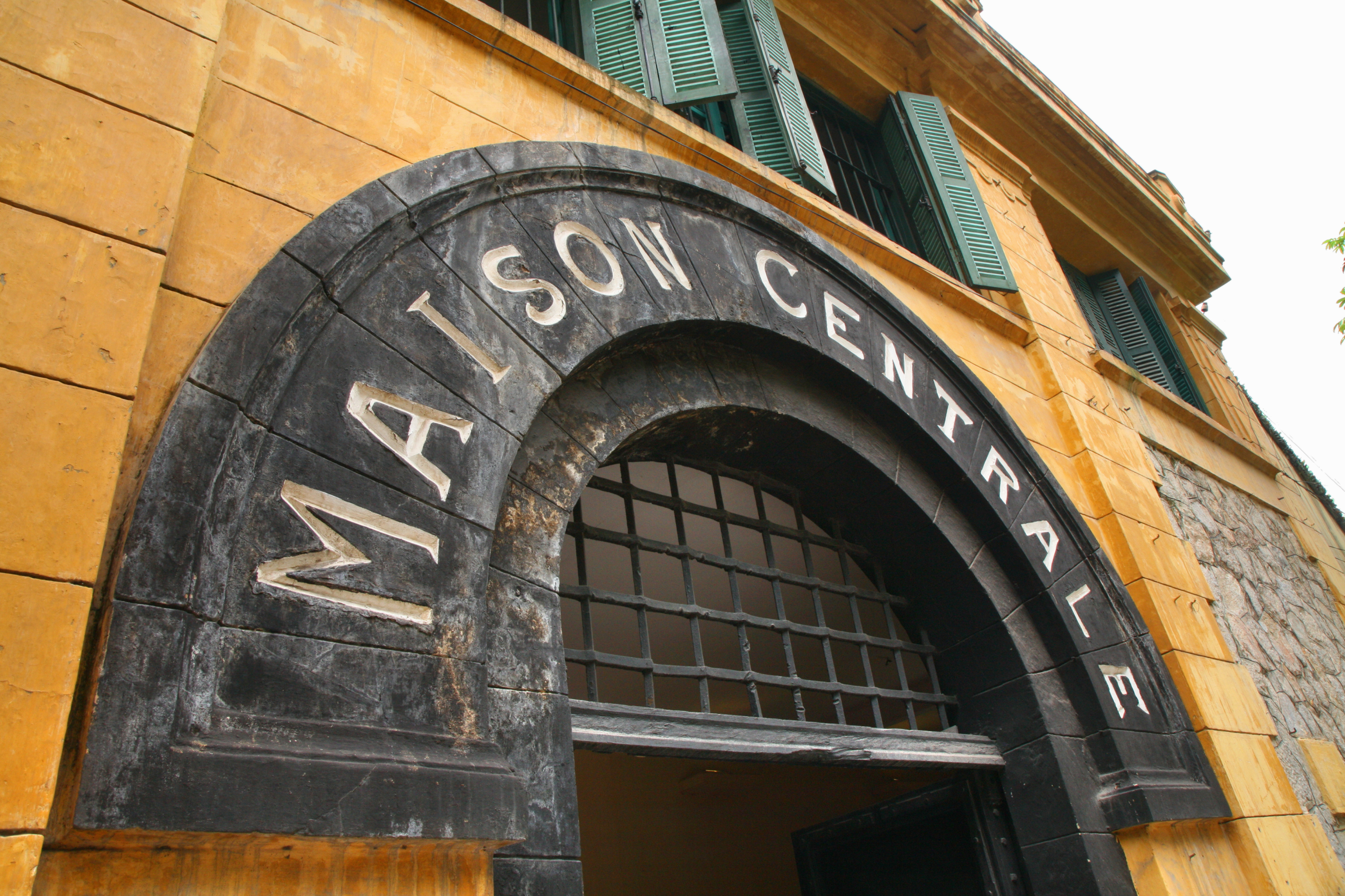 Dong Xuan Market Ha Noi is a Soviet-styled building located in the West end of the Old Quarter, its history dated back to the Nguyen dynasty. With the wide range of goods and services, it has been very famous for not just the locals but also tourists. Since mostly every store owners can speak english properly, you can practice your bargain skill to get good deals !

Located 40 mins away from the center of Ha Noi, Bat Trang Ceramic Village is one of the famous destinations outside of Ha Noi you can visit within a day. You can catch a bus or taxi to get there. There are many handicraft villages surrounding Hanoi but Bat Trang is the oldest,said to be founded in the Ly dynasty or even earlier and is the best known pottery village of Vietnam. Tourists will get know how bowls, plates ,pots, bottles, vases are made by the artisans and then try to make their own masterpiece ! 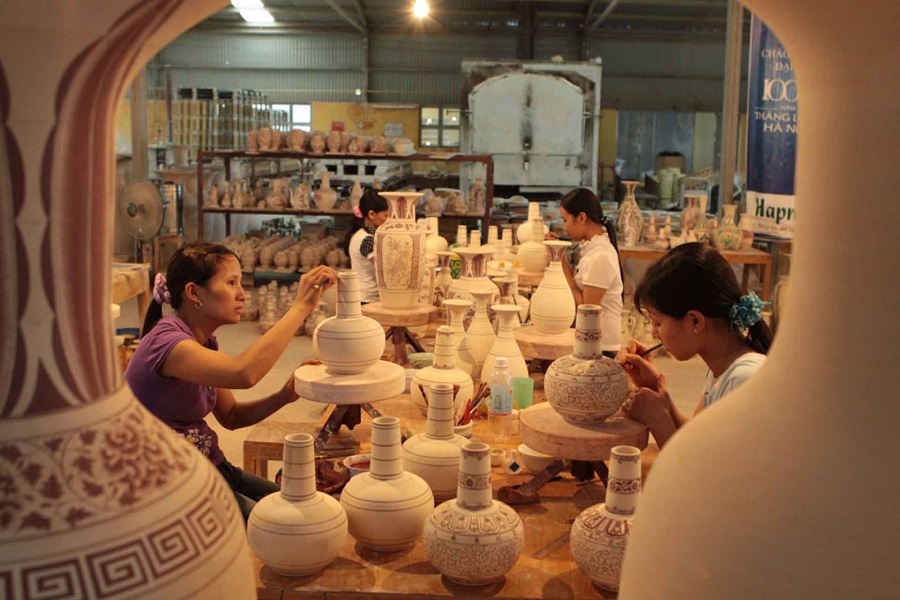 Perfume Pagoda is 60km away from Ha Noi, it takes around 2 hours on land route and around an hour going on a rowboat on the Yen stream to get to the pagoda. I bet experiencing the beauty of the surrounding nature on a small boat would be something memorable for everyone! Huong pagoda is in the heart of the vast complex of Buddhist temples , it’s surrounded by many sacred pagodas, temples, shrines scattering around the Huong Tich mountain. Ba Vi National Park is one of the most recommended destination to travel to within a day for adventurers. It’s 48km away from Ha Noi , you can either ride a motorbike or take a taxi/bus here but it’s much much more amazing to explore by bike. There are alot of fun outdoor activities to do such as Trekking, Camping , Fishing around the Thien Son Waterfall area. Besides, you can pay a visit to the coloful Cactus Garden or the mystic French Ruins. 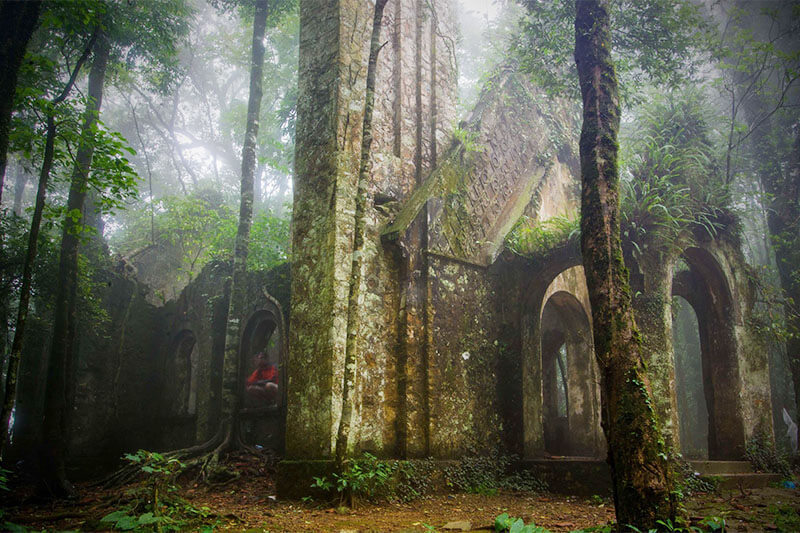 Not just the architectures, the traditional recipes and flavors of the food in Ha Noi are also kept and passed on for generations. The cuisines in Vietnam is very diverse and many Ha Noi originated dishes are widely known inside and outside of the Nation such as Phở Ha Noi, Bún Chả (  Barbecued Pork with Rice Vermicelli) , Bánh Cuốn( Steamed Rice Rolls) , Phở cuốn ( Rolled Pho),.. ect. Moreover, street food is a thing here, it’s so cheap and delicious bringing you unforgettable taste that you have never had before like Fried steamed wheat flour cake, Pillow cake,  Banana cake, yam cake. 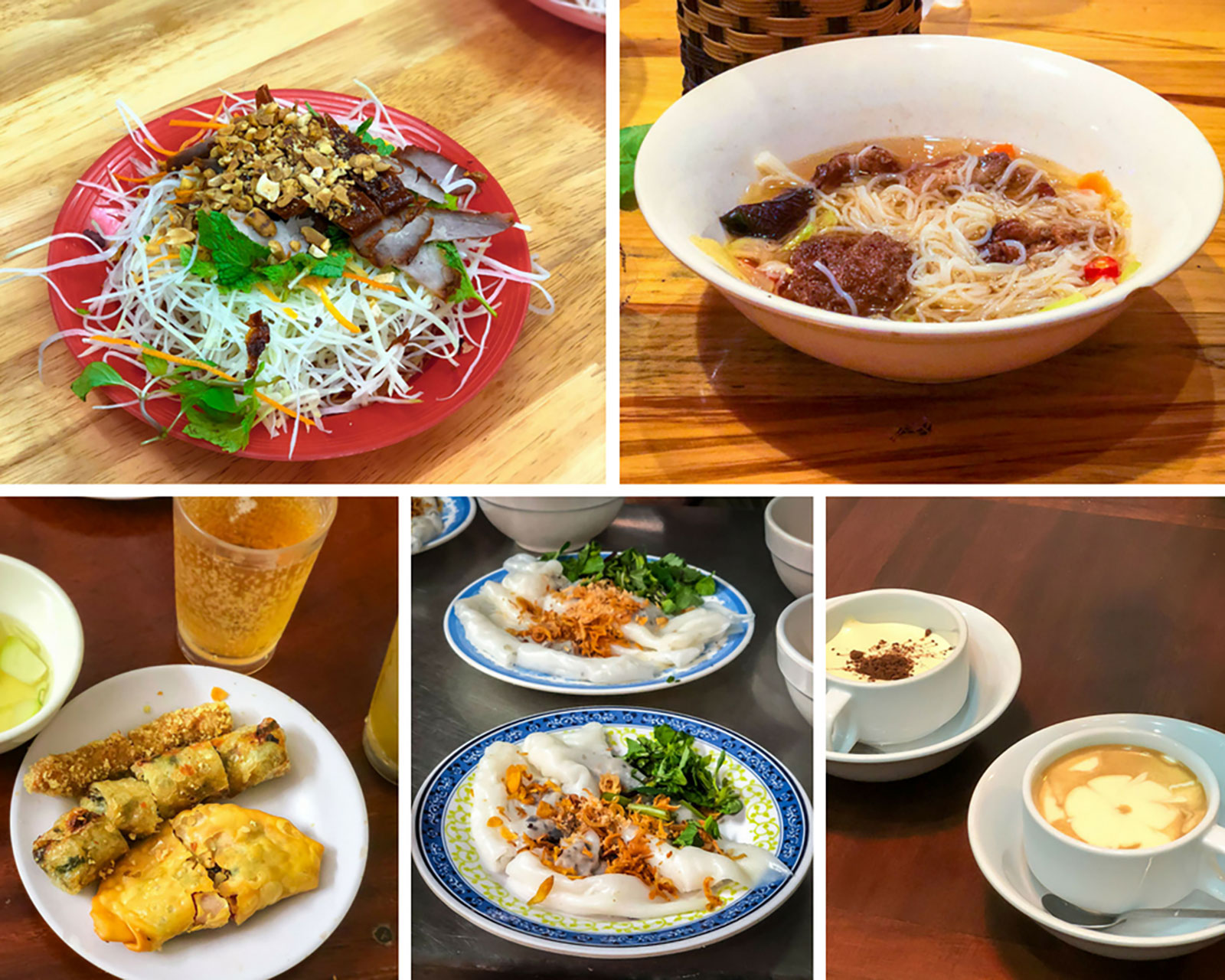